So you have a new system and want to know what the load limits are. For that you want to run a benchmark. 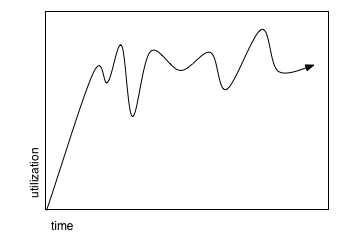 You grab a box and find a method to generate load. Eventually the box will be fully loaded and you will notice this somehow.

The first mistake: running the load generator and the system to test on the same box. That won’t work.

It’s our goal to bring the box to its limits. Actually, we want to push it past that in order to see what it is that is limiting it. That will happen only when we are able to generate more load than the target system can actually process. If the load generator and the target system are sharing any resources that will never happen: The starved resource, for example CPU, will be slowing down not only the target application but also the load generator until we are reaching equilibrium at an unknown point below the actual limit.

That way we will never see what color the smoke is when the box catches fire, that is, what the actual system behaviour under overload is. So we need to separate the load generator and the target system.

The second mistake: The target system or the load generated are not close enough to production. In database land, typical mistakes are

In all of these cases we will be learning something, but it will not easily port to production. For example, in 2005 the german computer magazine c’t had a test media shop selling CD and DVD media, and was using this to benchmark implementations of the system with different databases. The actual benchmark was an equidistribution of queries, so there have been no best sellers and no long tail.

To win the benchmark it was mandatory to disable all caches, because there was no set of popular media which would have been gaining from caching. That outcome is the opposite of what is necessary in a real world scenario, where there is a clear long tail distribution of queries.

The closer you can bring the test load, the tested system and the test data to production the besser the results. Which is why at work we are trying very hard to make testing in production safe, and then we test whatever is possible in production.

When you offer load to a system, the average load on the system will rise. But load usually is not constant, but will vary, depending on what users are doing and how expensive the individual requests are: Not all operations are equally expensive. 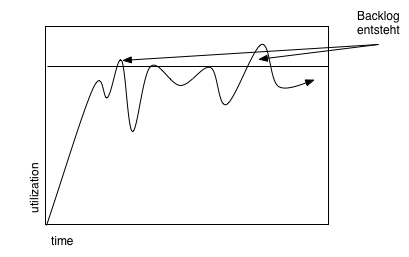 A system close to saturation: Average load is slightly below the maximum, but individual peaks spike above the saturation line.

Consequently we are not pushing the system to a limit, but we are raising a rolling average in which the actual load is constantly fluctuating and oscillating around this average until the peaks exceed the point of saturation.

The average offered load is below the 100% saturation line, but the peaks are already exceeding the limit.

That is of course nonsense. The saturation limit is a hard limit, the system can’t produce more than that, because a necessary resource is exhausted and the system is constrained by that resource. So what actually happens is that the system will be building a backlog whenever the offered load goes above the 100% line. Requests will pile up in some queue and will only be processed when the load goes below that limit.

As we push the system harder, it will exceed the saturation point more and more and phases where it can gain on the building backlog will become rarer. But since the costs for an individual request vary, it is hard to overload the system in a controlled way - harder the higher that variance is.

That is one of many reasons why we focus on outliers and worst cases first when we care about optimization: In order to be able to meet any kind of service level objective we need to handle these extremely bad cases first and narrow the band of possible response times, even if that does not move the mean much. Only then we can try to improve the mean response time of the system.

Wait time and the hockey stick 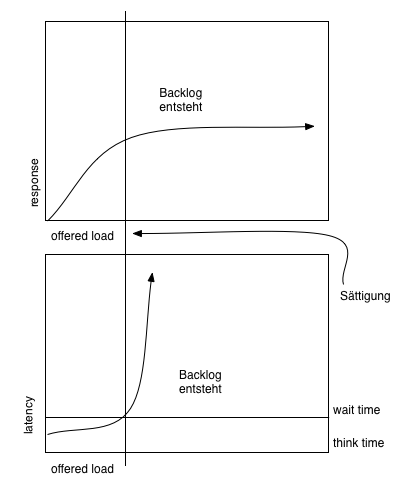 As we increase load, each request will generate a response: the curve in the capacity graph goes up at a 45deg angle. Even as the load rises, requests will take approximately the same time to process - we are calling this time the think time.

Once we approach saturation, a resource in our system will be starved and constrain capacity. Even if we are offering more load, this will not generate more responses. The capacity graph flattens out. Since more requests are coming in than we have capacity for, these excess requests will be queued. Wait time is being added on top of the think time.

And since we are continuing to add more requests than we can handle, the queue and the wait time will rise rapidly and without bounds. The latency curve has the shape of a hockey stick.

That is not a theory, but can be shown in real production systems. 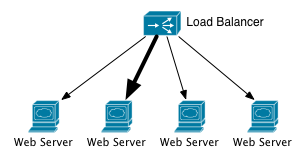 A typical production setup. User requests are entering the system from the internet at the top, hitting a load balancer. The request are routed to a set of web servers behind the load balancer.

Assuming that you have a minimum size for load testing with production load: You need to have a sufficient number of users, large enough so that individual users do not contribute in a meaningful way. You will need a frontend load balancer in front of a number of webservers, and you need to be able to modify load distribution weights live in this setup.

The load tests starts with running an Apache Siege load generator at a very low setting from the outside against the setup - actually, the Siege is not running against the load balancer, but against one individual web server which is the one which we will be trying to overload. This is not done to generate load, but to measure latency: In normal configuration our system will not be overloaded, so the baseline latency we are seeing is think time.

During the benchmark we are playing with weights in the load balancer in order to direct more load to individual web servers. The load balancing weight of the web server getting the Siege requests is now being increased so that it will need to handle more actual user requests than the other servers. Eventually either timeouts will be showing up in the error log, or the request latency shown by Siege will be going up dramatically.

Either signal indicates saturation, and we need to stabilize offered load at or very slightly below this point in order to find the saturation point.

Here is a time domain plot of such an event:

In the test graph above we are looking at query counters of a MySQL database slave during three load test events. Write queries (insert, update, delete) are coming in through replication from the upstream master and are not affected by the load test. Selects are being increased by load balancer manipulation.

During the third test there is a spike of update statements due to a cron script running and affecting the test, invalidating the results of that run.

Taking the results from the above run and plotting them in a latency graph results in the following graph. The hockey stick is clearly visible: 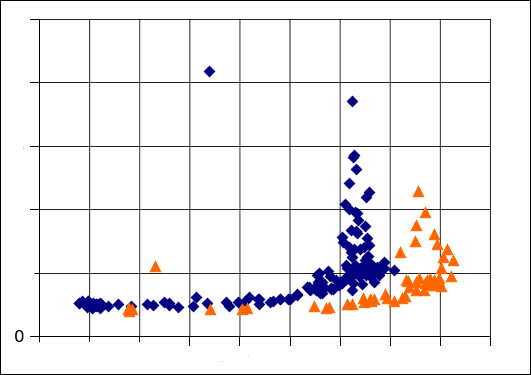 Latency graph: test1 is shown in blue, test2 in orange.

The graph shows offered load vs. latency of the configurations test1 and test2 from the run above. Configuration test2 is clearly superior. A variant of this graph uses larger symbols as the error rate of that measurement increases to add another dimension. That way the stability of the system under test in overload is being visualized as well.